Why The gift of diversity? Easy to say. Because we strongly believe we have to celebrate diversity every day, hour, instant of life as a gift. A gift we should conquer, a natural never expected present. Because discovering us is an extraordinary adventure that concerns all persons, without any exclusion, who is welcome and, moreover, who wishes to welcome someone else. Because only knowing us we’ll be able to understand others and vice versa. What a better way to meet everyone than telling and listening stories? 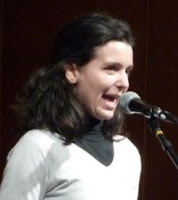 The Gift of Diversity Storytelling Laboratory begins its journey exactly in November 2005 in Rome, created by Alessandro Ghebreigziabiher.
A Laboratory designed with a dual meaning: an experiential training, led by Ghebreigziabiher, but also a laboratory in the sense of space where people have the opportunity to work together and share personal resources.
We chose storytelling as the main tool.
However, the diversity term is what characterizes the whole, with the meaning we clarify in our idea, like this abstract tells: the most powerful, significant and revolutionary way to underline the importance of differences and richness inside our individuality, is showing the diversity of people who often think themselves as equal (not celebrating 'the equality of strangers'...), telling how much they are interesting to listen when they are speaking about themselves and how all become wonderful if they are so proud to mix each others.
That is why we believe that Italy, with all its dialects and diverse people, is already a multicultural land, with immigrants or not. In 2007 we had the number one edition of the Storytelling Festival in Rome, The gift of diversity. The theme was the diversity of narrative methods and so we mixed Yvan Tetelbom’s poetry with Gabriella Ghermandi’s autobiographical stories, Cristina Ali Farah’s personal novels with the performance of the Laboratory students and so on.
The main theme of the 2008 Edition was the diversity of storytellers and we have promoted the following news in several languages, including English but also dialects of Naples, Rome and other Italian idioms, which are true languages: “The Intercultural Storytelling Laboratory is looking for performances to join the II edition of the festival "The gift of diversity". Dialects, English, slang, French, Italian, Spanish, Arab, every language will be accepted! You have only to tell us a story, a true one…”
About seventy artists and companies from north to south Italy requested their participation, with very interesting and original shows, giving evidence that perhaps we are not so crazy to believe in a multicultural Italy, even before enriched by who comes.
The result was a festival of ten really amazing performances.
The 2009 edition was dedicated to the diversity of stories and was in June, again in Rome.
The invitation news was this: We’re looking for true stories. Did you live as protagonists or simple observers something that should be absolutely told? Send us your unique experiences.
The chosen stories have been told on stage by the actors of the laboratory during the event.
In late 2009, working for the fourth edition of the Festival, we published this Call for submission: We look for news. Do you know a fact that you think has been inadvertently or deliberately ignored by the media?
This time too we have reached many interesting proposals and important news all worthy of being accepted, however, we have reluctantly had to make a choice.
A sincere thank you to those who have considered us worthy of their trust.
The fourth edition of the Theatre Storytelling Festival, The diversity of news, was on June 2010 in Rome.
In 2011 this was the invitation: Do you have a dream that can create a better world? Tell it through a story and send us the text. The selected works will be staged at the next edition of the festival. So it was: V Edition, The diversity of dreams, 2011, May in Rome.
For the next edition we published the following invitation: The love between a parent and a child, between a man and a woman, between friends, between people of different origins, between creatures of the same sex. The platonic, erotic, romantic, love, hidden, shown, veiled love. The impossible and yet unstoppable love. Do you have a show about these loves? So we come to the sixth edition of our Festival, The diversity of love (May 2012).
Working for the seventh edition of the event, "The diversity of crisis", this was the invitation: We want stories: have you an idea on how to tackle the crisis with lightness and irony? Tell it through a story.
The selected works have been told by the actors of the Laboratory during the Festival, which was in Rome, at the Teatro Planet, in April 2013.

The diversity of the arts, XI edition, was opened to several disciplines, obviously including theater, but also dance and music; it took place from 25 March to 9 April 2017. The twelfth edition, The diversity of climate emphasized an inescapable and fundamental topic for us, namely global warming and climate change, but not always considered a priority by our society, especially at high levels. For the record, the event took place from 6 to 14 April 2018. In 2019 we dedicated the XIII Edition to The diversity of madness, an equally neglected argument, explored with various shows, including theater and stories, music and dance, from 5 to 13 April. For 2020, the XIV Edition would have been dedicated to The diversity of Italy, but for reasons now shared by most of the world we had to postpone the event.

We hope to restart soon!